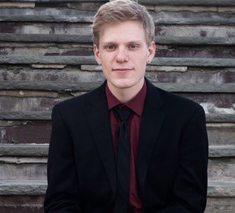 Zachary Hann is a clarinetist based in New York City. He performs primarily with the Bridge Arts Ensemble, a group of instrumentalists and singers who perform and give educational workshops in public schools throughout New York State. He also teaches clarinet lessons in the Music Program at Bard College. Zachary moved to New York City in 2013 to study at the Juilliard School. Since then, he has performed at most of the major city’s major concert halls, including Carnegie Hall, David Geffen Hall and Alice Tully Hall. In 2014 he performed with Alan Gilbert, then conductor of the New York Philharmonic, in the inaugural New York Philharmonic biennial at the Metropolitan Museum of Art. Recently, he has been invited to perform with the American Ballet Theater Orchestra and the Orchestra of St. Lukes. In 2018, Zachary joined the Colburn Orchestra, under the direction of Stéphane Denève, on their first-ever international tour. As a soloist, Zachary has given recitals in New York City, Los Angeles, Vancouver and Taiwan. Also an accomplished saxophonist, Zachary gave the American premiere of Tajik composer Farangis Nurulla-Khoja’s Saxophone Concerto, entitled Ravishi Nur, with the New Juilliard Ensemble. Born and raised in New Jersey, Zachary began his musical studies in his public elementary school. He later enrolled in the Manhattan School of Music Precollege, where he studied both clarinet and saxophone. Zachary received his Bachelor of Music degree from the Juilliard School in 2017.
[email protected]