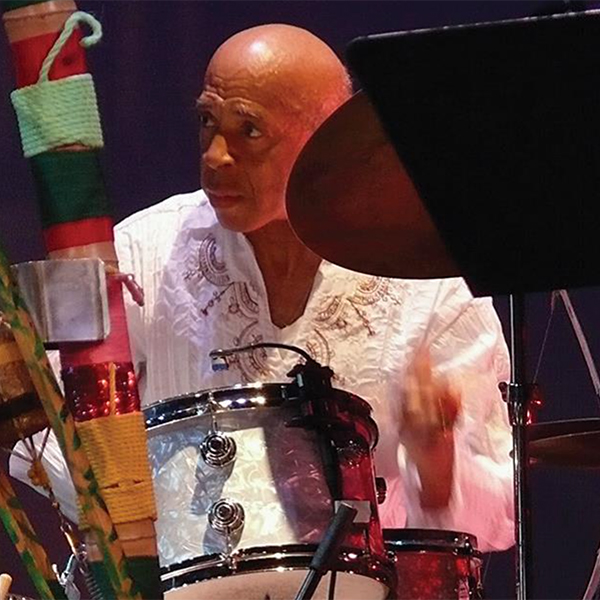 Growing up in Chicago in the 1950s, Thurman Barker was exposed to the city’s rich musical heritage, regularly hearing R&B, doo-wop, soul, jazz, and blues. Accordingly, he began his professional career at age 17 by anchoring the rhythm section for blues legend Mighty Joe Young. He then attended the American Conservatory of Music and later Roosevelt University, where he received classical training. While serving as percussionist for the city’s Shubert Theatre throughout much of the 1960s, Barker played for numerous national touring productions, including Hair, The Wiz, Grease, One Mo’ Time, and Ain’t Misbehavin’. A versatile drummer and percussionist, he also performed with singers Billy Eckstine, Marvin Gaye, Bette Midler, and Vicki Carr, and worked with classical groups like the Chicago Chamber Players and the New York City Opera. Perhaps Barker’s most notable musical experience has been with the Association for the Advancement of Creative Musicians (AACM), an organization founded in the 1960s to promote innovative music and its players. A charter member of the group, Barker first appeared in AACM productions with Joseph Jarman’s pioneering ensemble. He then went on to play with many other members, including Muhal Richard Abrams, Amina Claudine Meyers, Anthony Braxton, Leroy Jenkins, Roscoe Mitchell, and Henry Threadgill. In the 1970s and ’80s, after moving to New York, Barker worked with jazz giants Cecil Taylor, Sam Rivers and Billy Bang, touring with their groups and recording numerous albums with them. Most recently, he has performed with trombonist and composer George Lewis at the Festival International Musique Actuelle in Victoriaville, Quebec. Since creating Uptee Records in the late 1980s, Barker has released five recordings as a leader, including Voyage (1987), The Way I Hear It (1999), Time Factor (2001), Strike Force (2004), and Rediscovered (2008). In 1994, his work “Dialogue,” commissioned by Mutable Music, premiered at Merkin Concert Hall in New York City. The Woodstock Chamber Orchestra premiered Barker’s chamber piece “Expansions” in May 1999, and that same year he became a lecturer at Smolny University in St. Petersburg, Russia. Barker has taught jazz history and performance at Bard College since 1993. Through his efforts to develop the program, he was appointed professor of jazz studies in June 2016.