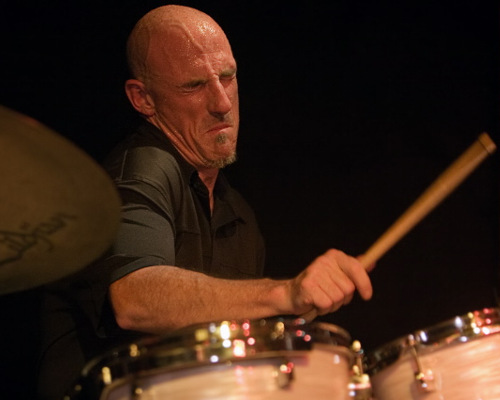 O’Brien was born in Flushing, Queens, New York. The son of drummer Bill O’Brien, Peter began playing the drums as soon as he could sit up at the set, playing along with recordings of Miles Davis, John Coltrane and all the greats of jazz. Formal studies with his father began at the age of five.

Peter attended St. Andrew Avellino grammar school and at age seven tried out for and was accepted into the school orchestra, which consisted of seventh and eighth graders. He then received a music scholarship from Power Memorial Academy High School. Peter studied privately with Charlie Perry from age 13 through 17. In 1976, at age16, Peter attended a drum clinic held by Charlie at Hofstra University. The last week of the clinic featured studies with Jack DeJohnette, whose interest in Peter led to recommendations to John Ambercrombie, Bill Connors and Miroslav Vitous. After graduating high school, Peter decided to forgo college and dove headfirst into the New York City jazz scene garnering the attention of drummers Jo Jones Jr., Al Foster, Jimmy Lovelace, and Michael Carvin (with whom Peter studied in 1978-79).

After a period of sitting in at jam sessions and gigging around the city, Peter went on the road with various showbands touring the US. In 1982, he toured the US with Brother Jack McDuff and, from 1984-1985, performed all over the US and Canada with the Edgar Winter Band. The band featured the legendary singer Jerry LaCroix (original lead singer for White Trash) and is the only band to perform the jazz-inflected fusion material from Edgar’s first groundbreaking record “Entrance” (Epic), as well as his rock and blues music. During this time, Peter also performed several dates with Roy Buchanan, including a sold-out show at the Beacon Theatre with Johnny Winter, Buddy Guy and Junior Wells. From 1986-1987, Peter toured Europe with Mark McMillan (songwriter for Chaka Khan).

In early 1988, Peter moved from NYC to Woodstock, New York, and soon began working with John Hall. In 1989, Peter became a member of Hall’s band Orleans (Still The One, Dance With Me). Peter has appeared on seven CD’s (four with Orleans, three with Hall), three tours of Japan (two with Orleans, one with Hall), and countless US tours and dates (including Woodstock ‘94) and was the subject of a feature article published in Modern Drummer’s Rhythm and News (Japan). Peter toured and recorded with Orleans through 2004. Peter also freelanced throughout this period and did other major tours with Dr. Lonnie Smith (Spain 1992), Rory Block (US and Europe 1996-7) and Tracy Nelson (US 1998).

Peter joined saxophonist Eric Person’s band, Eric Person and Meta-Four in February of 2001. Eric, Peter and band mates John Esposito (piano) and Kenny Davis (bass) performed at the Guimaraes Jazz Festival in Portugal in November 2002, and “Live at Big Sur” was released in 2003 from their 2001 performance at the Big Sur Jazz Festival.. Peter is also a member of the John Esposito Trio with Ira Coleman on bass. Ira and Peter are featured on Esposito’s 2003 release “Down Blue Marlin Road” and saxophonist Jeff Marx’s 2003 CD “Treading Air, Breathing Fire”. During this period Peter also appeared on the 2004 Esposito Quintet record “The Blue People” with Eric Person, trumpeter Greg Glassman, and Kenny Davis.

Peter continued touring and recording with Eric Person and Meta-Four through 2007 with extensive U.S. tours in 05,06 and 07. Along with performances at major clubs and festivals throughout the U.S., the band gave master classes at many of the top colleges and universities in the country. Peter appeared on two additional CD’s with Eric; Reflections and Rhythm Edge released in 2005 and 2007 respectively.

Peter has been a member of pianist, composer Peggy Stern’s Estrella Trio since 2005 and is on the 2006 release, Estrella Trio. Performances include Club Kitano in NYC, The Deer Head Inn and The Homer Jazz Festival in Homer Alaska as well as yearly appearances at the Wall St. Jazz Festival in Kingston, NY (2005-2010).

Peter’s long association with John Esposito continues to date with appearances on John’s latest CD releases: Book of Five Rings (2009), Orisha (2010) and on saxophonist Mitch Kesslr’s two CD’s on John’s SunJump Records label; Erratica, and Erlkonig. Other CD’s on SunJump that feature Peter are Bloom of Creation, Jayna Nelson; and Earthship, Sangeeta Michael Berardi. Peter also will be on the documentary and recording abouta Sangeeta by filmaker Burril Crohn and SunJump Records

2014-15 has been a very busy time for Peter as he has returned to touring with Orleans (including dates playing with Paul Barrere and Fred Tachette fro Little Feat) as well as continued work with both John Esposito (quintet recording featuring Greg Glassman, Stacy Dillard, and Ira Coleman) and Christine Spero (Spero plays Nyro project revisiting Laura Nyro’s music to much critical acclaim from both live performances at Mountain Jam, The Cutting Room(nyc) & others and new CD) and many others.

In addition to his busy performance schedule, Peter teaches at home and at Bard College and freelances as a studio session player. He has played on national jingles for Continental Airlines, AT&T, Macy’s and Burger King. He has also worked as a clinician at Bard College, SUNY New Paltz, and Western Connecticut University.

In 2016,Peter joined The Arlen Roth Band featuring the legendary guitarist. Along with regional northeast dates at esteemed venues such as The Iridium, The Cutting Room in NYC, The Falcon(Marlboro,NY),The Colony Cafe,(Woodstock NY), My Father’s Place (Roslyn NY), & The Iron Horse Music Hall(North Hampton Mass.) often with special guests such as John Sebastian, Cindy Cashdollar & Duke Robillard, Peter also joined Arlen for a Midwest Tour in April 2019. The tour concluded with an appearance at Jorma Kaukonen’s Fur Peace Ranch where the band also back guitar legend G. E. Smith & was joined by Jorma as well. Prior to the tour the band performed on Don O’Dell’s Legends TV show. Unfortunately, Arlen’s 2020 spring tour of the Southeast was canceled due to the Coronavirus.

Peter toured with Blues Guitarist Slam Allen in 201-17, notably at the Blues To Bop Festival in Lugano, Switzerland.