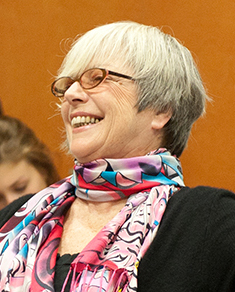 Pamela Pentony appeared as a principal in the first rock opera on Broadway, "SOON", whose cast included Peter Allen, Nell Carter, Richard Gere, and Barry Bostwick, to name a few.  She went on to work at The Public Theatre in the titular role in "IPHEGENIA" with Tommy Lee Jones and Patti LuPone under Joe Papp. She also performed in London at The National and the Young Vic, and appeared at clubs and festivals throughout Europe.  She sang jazz in the clubs of Paris including Le Bilboquet and Le Pigeon Blue, and her favorite, in Scotland, The Edinburgh Jazz Festival.

She toured with a big band in United States for several years.  She has sung on many recording projects, working with artists such as Barry Manilow, John Prine, Muddy Waters, and Dusty Springfield.  Cast recordings and film recordings round out her studio work.

She has been teaching most of her life, having grown up as the child of two dancers who had a studio where they taught every day.
She directed the Woodstock Youth Theater for two years, mounting productions of original musicals that she collaborated on with Dennis Yerry, musical director.  Of particular note was a production of an original musical, Gulliver's Travels, with a cast of 38 students, ranging in age from 6 years to 14 years of age.  She has been the musical director for productions of Bird-On-A-Cliff's "AS YOU LIKE IT" for their Shakespeare Summer Festival in Woodstock, NY.

She appeared in Woodstock Actor's Theatre productions of "Waiting for Godot" as Pozzo, "Alice in Wonderland" as The Red Queen, "Bazaar and Rummage" as Alice Gittings, "Before Breakfast" as Mrs. Rowland, and several other productions.

Miss Pentony is the recipient of several awards for voice over work, notably the American Women in Radio and Television's (AWRT) award, and several ADDY awards.

“I believe in nurturing the natural creativity in each person. The creative spark that we all have sometimes just needs the breath of experience to become a life-long passion. I teach voice in an organic and individual approach with an emphasis on specific skills and an overall view of the whole person and their future. Classes are taught as workshops to develop skills and encourage cooperation.”