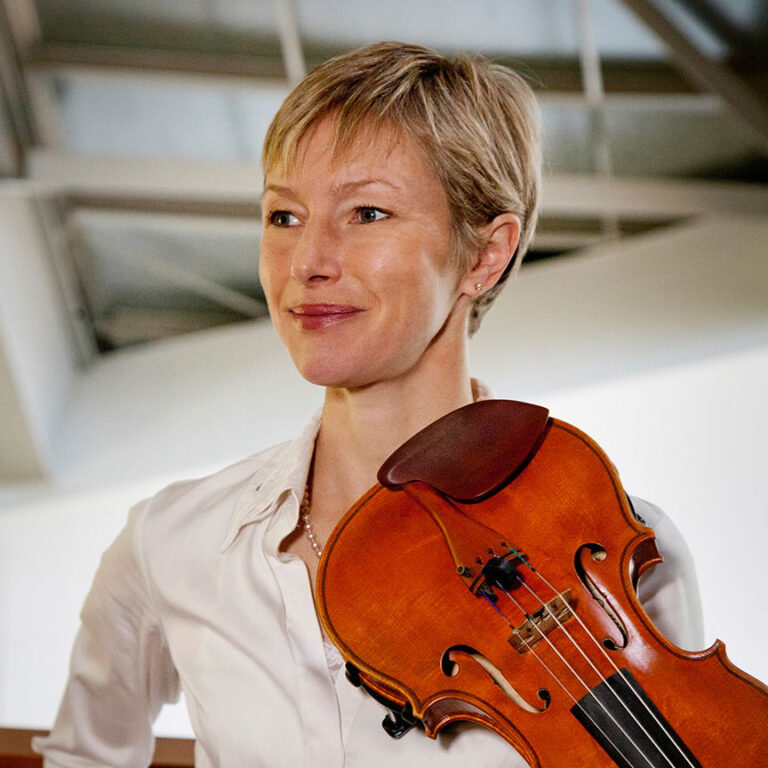 Kathryn Aldous was born in England. At the age of 13 she won a full scholarship to study at Chetham’s School of Music in Manchester, and subsequently went to Christ’s College, Cambridge as the recipient of a University Music Award, and to the Guildhall School of Music and Drama, London, as a Stanley Picker Scholar. Her teachers were Majiec Rakowski, John Glickman, Howard Davis and Gillian Sansom. Kathryn was coached in chamber music by David Takeno, Emanuel Hurwitz and the Amadeus Quartet.

Immediately after leaving the Guildhall, Kathryn was appointed a first violinist in the English String Orchestra, touring throughout Europe with Yehudi Menuhin and Nigel Kennedy, and recording the core string repertoire with Nimbus to critical acclaim. In 1998, Kathryn joined the RTÉ National Symphony of Ireland, playing full seasons of subscription and broadcast concerts across the symphonic repertoire, including complete symphonic cycles of Mahler, Bruckner, Beethoven and Shostakovich, along with regular world premieres, recordings for Naxos, and international tours throughout Europe and the United States. Kathryn played annual seasons with the Bolshoi Ballet and Tchaikovsky Perm State Ballet, and was a member of the orchestra in residence at the Wexford International Opera Festival. She performed with Camerata Ireland, the cross-border ‘peace’ chamber orchestra directed by Barry Douglas.

Away from the concert hall, Kathryn was soloist in the UK premiere of Because for violin and orchestra, based on The Beatles song of the same name, conducted by Sir George Martin. She was a longtime member of the Irish Film Orchestra, with credits including Ella Enchanted, The Butcher Boy, The Boxer, The Tailor of Panama and MTV performances with artists including U2, The Corrs, Katie Melua, and at the opening ceremony of the 2006 Ryder Cup.

In 2010 Kathryn moved to Bard, where her husband, Richard Aldous, is Eugene Meyer Professor of British History and Literature. She plays with the American Symphony Orchestra and is string coach to the Bard Orchestra. As founding Music Director of the Bard Conservatory Youth Orchestra, she is excited to be using her two decades of professional orchestral experience to help train a new generation of players in the Preparatory Division.

Kathryn welcomes violin pupils at the Conservatory from beginner to advanced levels. She has a deep commitment to teaching young people, having previously taught in Britain and Ireland, including a period as Musician-in-Residence at Sandroyd Preparatory School and as Director of Strings at Vinehall Preparatory School.

Kathryn plays a Michiel De Hoog violin made for her in 1999.